A page refresh occures when a subject is selected.

We are listening to the increasing global attention in society being devoted to improving animal welfare in animal protein chains. It is also our responsibility to guarantee the intrinsic value and needs of calves in our chain. We remain critical of our own practices and are continuously improving ourselves. Not only on our own, but also in collaboration with dairy and veal farmers and knowledge partners, we are searching for ways to improve animal health in general and reduce animal diseases. As a result of this, we can further reduce the use of antibiotics in our chain.

Working with animals in the meat sector is subject to strict legal requirements. Our meat processing plants are under permanent surveillance by various authorities and are subjected to camera monitoring. In addition, strict animal welfare protocols have been implemented at sector and individual company level. The meat sector is therefore able to minimise the number of animal welfare incidents that occur in meat processing plants. But, that number should be reduced to zero, says the Dutch Meat Association (COV).

In 2020, members of the COV, including the VanDrie Group, entered into discussions with each other to arrive at a sector-wide code of animal welfare. Karel de Greef, researcher in Animal Husbandry and Society at Wageningen Livestock Research, supervised this process.

Karel de Greef: “The process involved numerous interviews with employees from multiple organisational layers of the various participating organisations, including VanDrie subsidiaries Ekro and T. Boer & zn. This includes board members and location managers, Animal Welfare Officers (AWO), quality managers and production staff who work with animals on a daily basis. An important part of the process was also that stable managers and AWOs from the companies visited each other's production sites, to see and discuss how the other was doing. The findings of the interviews and visits served as a basis for the content of the Code of Conduct.”

It is essential that companies in the meat sector work together more, in order to reflect on and learn from each other's practices for ensuring animal welfare.

A key word that encapsulates the process is 'cooperation'. Cooperation is a word that has multiple meanings. Working with animals remains a matter of customisation. On the production line, cooperation between people must be maximised in order to be able to react adequately to animal behaviour and deviations in the process. But on a business-to-business level, it is essential that companies in the meat sector work together more, that they reflect on each other's methods for ensuring animal welfare and that they learn from each other. An equally crucial part is to implement this attitude among employees who work with animals.

Based on the findings of this process, the sector drew up the 'Code for animal welfare at the slaughterhouse', which came into force at the beginning of May 2021. Key measures included in the Code include establishing long-term working relationships with employees who work in the stall, exchanging experiences and best practices, providing more intensive employee training and involving external animal welfare specialists. By adopting this process, companies in the meat sector have consciously chosen to show openness to each other. When it comes to the careful handling of animals, visiting one another’s sites is an activity that remains ongoing. The challenge now is to ensure that the joint effort is and remains in focus at all levels of the companies.”

Read more about the ‘Code of Animal Welfare at the Slaughterhouse’ here.

In 2020, approximately 60 percent of the calves in our integration came from dairy farms in the Netherlands. This means we are dependent on imports to meet the demand from the market. The calves from abroad primarily came from our neighbouring country, Germany: 30 percent of the calves from our integration originate in Germany. The remaining 10 percent of the calves come from other EU Member States, primarily from Belgium, Luxembourg, Denmark, Estonia, Ireland and Lithuania. We have been reducing the number of calves that are transported over long distances for many years. Compared to the reference year 2009, long-distance transportation decreased by 32 percent in 2020. In 2020, we set out our goal regarding this theme in more specific terms. For example, we have decided to stop importing calves from Eastern Europe into the Netherlands by 2025. With this decision, we are speeding up the execution of the sectoral objective to reduce long-duration transportation by 20 percent by 2030.

Preventing animal diseases and reducing the use of antibiotics

In 2020, for example, the VanDrie Group was active in a research project into polyserositis (infection of the serous membranes in calves) caused by the bacterium Mannheimia haemolytica in the calf husbandry sector in the Netherlands. Mannheimia haemolytica can be found in the nasal cavity and the pharynx, and around the tonsils in healthy animals. If the animals are under stress, however, or if their immune system has been weakened by an infection, the bacteria can multiply explosively in the upper airways. The large quantities of bacteria are inhaled by the animal in that case and become lodged in the deeper airways where they can cause pneumonia and pleurisy. Sick animals can infect other members of the herd via direct contact or via smearing of their mucus or nasal mucus. In the research project, pathophysiological and epidemiological research was conducted into the causes of this illness so that better guidance can be given to reduce the incidence of polyserositis. 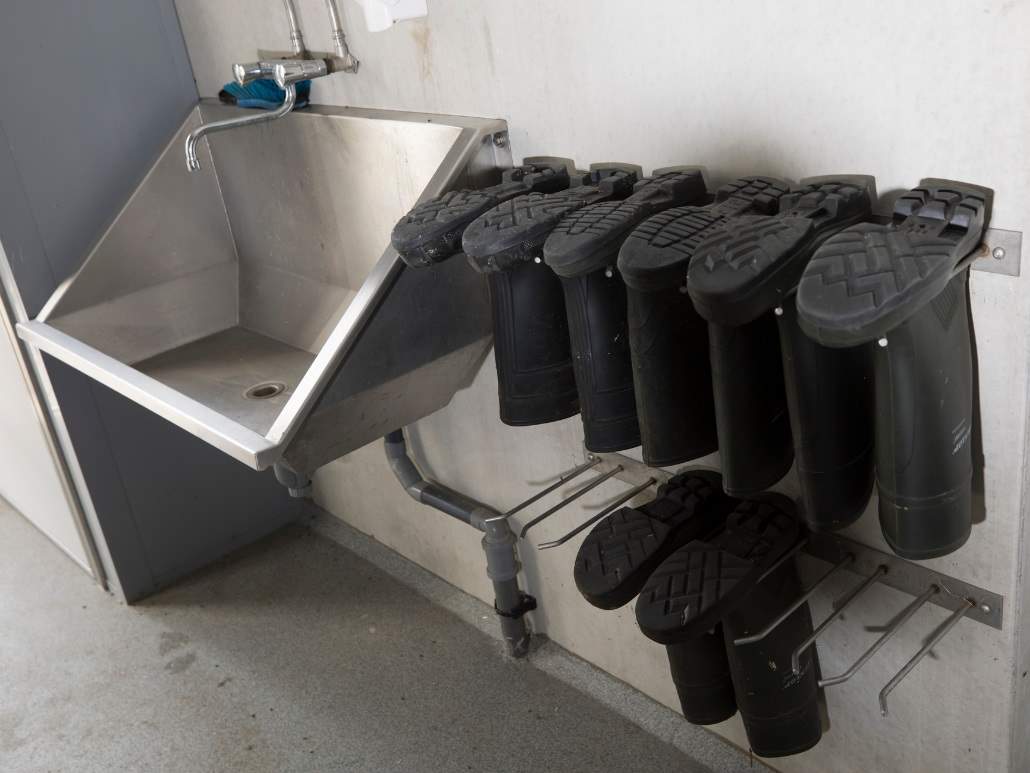 In 2020 and 2021, the VanDrie Group participated in a sectoral study into salmonellosis at veal companies. Salmonellosis is caused by the salmonella bacteria. Cattle can absorb these bacteria via the trough. The bacteria subsequently lodge in the gastrointestinal canal, where they cause infections. After infection, animals excrete the bacteria via the manure over the course of several weeks. In this way, herd members can also become infected. It can also be transferred via visitors, clothing, tools or instruments, because the bacteria can remain living outside the animal. The most sensitive age for an infection among cattle is between two weeks and three months old. As part of the sectoral study, a study day has been organised for vets, advisers and veal farmers. A special hygiene protocol will also be developed that can be used in practice to prevent an outbreak of salmonella.

Read here how we collaborate every day with professionals on the prevention of animal diseases and improving welfare.

Whereas calves received extremely uniform feed before 2009, primarily calf milk, that has changed dramatically in the past decade. The share of roughage in the feed package has increased by 150 percent in 2020 compared to 2012. A substantial part of the milk has therefore been replaced by more feed concentrate and roughage. The shift from milk to more vegetable raw materials produces a more vital and healthier calf. The rumen creates more vitamin B and there is iron in the roughage. More roughage thus contributes to species-specific behaviour, such as rumination, and at the same time it fosters health.

Feed for calves plays an important role in improving the sustainability of the calf husbandry, as better rumen fermentation and feed utilisation leads to a reduction of ammonia and methane emissions. An optimal composition of feed with roughage and feed concentrate leads to a lower nitrogen and phosphorous input and less loss of ammonia and methane in the calf husbandry. In recent years, the VanDrie Group has gained new insights into the phosphate needs of calves by carrying out R&D research. This has enabled a reduction to be made in the phosphate levels in feed. In 2020, we managed to achieve a result of -6.2 percent compared to 2018.

Animal welfare in the chain

Safeguarding animal welfare is essential. We realise that the slaughter of animals is the most critical point in our production chain, and that this is something we may be called to account for. We always take signals altering us to possible non-compliance extremely seriously, wherever they have come from. At the beginning of 2020, the French animal rights organisation, L214, published images online that were made at veal processing company named Sobeval, which is a subsidiary of the VanDrie Group. According to L214, the images showed that Sobeval was not complying with the regulations with regard to the slaughtering process. In addition, L124 lodged a complaint with the public prosecutor from Périgueux. In the interim period, an administrative investigation was carried out at Sobeval by the French Ministry of Agriculture. That led to an improvement plan at Sobeval; a comprehensive training programme was given to employees. In October 2020, the prosecutor from Périgueux indicated that the case would be closed. Sobeval was not prosecuted.